The transition from the difference quotient to the differential quotient (first derivative) is demonstrated for the sine function.

The difference quotient (y2 - y1)/(x2 -x1), which is the tangent of the angle between both components at the model point, is shown as a magenta colored point.

The analytic first derivative function cos(x) = d(sin(x))/dx is drawn as a beige line.

The simulation demonstrates the limit process in deriving the first derivative of a sine function with a superimposed linear term (a straight line) . For this case the second derivative should be independent of the linear term.

A slider defines the blue model point x1 , y1 . Drawing the red point along the function defines the second point x2, y2 in the limit process. The parameter (gradient) c of the linear term is defined by drawing the magenta colored rectangle.

The secant between the 2 points is drawn in black, and is prolongated beyond the second point in green.

The ordinate difference (y2 - y1) is shown as a red arrow, the abscissa difference

The difference quotient (y2 - y1)/(x2 -x1), which corresponds to the tangent of the angle between both components, is shown as a magenta colored point.

E1: Choose a model point with the slider. Draw the red point to the blue model point (limiting process with vanishing difference).

The secant turns into a tangent, the magenta colored difference quotient becomes a point on the beige first derivative = a differential quotient.

E2: Move the model point near a maximum or minimum of the sine function and study the context.

E3: Position the model point close to the steepest point of the curve and study the process when you cross the inflexion point.

E4: Try several model points of the sine and convince yourself that the limiting process will always lead to a point on the cosine.

E5:  After this experience, how would you design an algorithm for the numerical calculation of the first derivative of an arbitrary, continuous function?

E6: How would you design an algorithm for the second derivative?

E1: Choose a model point with the slider. Draw the red point towards the model point (limit process with vanishing distance). What do you observe?

E2: Choose a model point near to an extremum (maximum or minimum) of the function and study the transition.

E4: Try with several model points if the beige curve is the limit of all of them.

E5:  Change c (by drawing the magenta rectangle):  What happens?

E6:  On the basis of your observation, how would you construct an algorithm for numerical calculation of the first derivative of a continuous function?

E7: How for the second derivative??

This email address is being protected from spambots. You need JavaScript enabled to view it.; Fremont Teng; Loo Kang Wee

Toggling the combo box will choose their respective functions

Drag the two points to get the difference quotient. 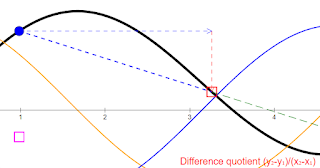 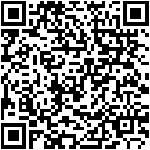