This simulation demonstrates the effect of forces acting on a block across a distance through three perspectives: kinematics, dynamics and energy changes.

In the simulation, the block is made to travel through three regions, A, B and C.

In region A: The block experiences an applied force to the right across a frictionless surface.

In region B: The block experiences no horizontal force as it slides to the right across a frictionless surface.

In region C: The block experiences friction only as it slides across a rough surface1.

1Note: friction is zero when the block is motionless and is not attempting to move from rest

2Note: you are also allowed to drag the box for the range x > - 0.4 units, however, the conditions of regions B and C still apply

3Note: values of mass and friction are co-dependent, i.e. changing one value will affect the other

Step-play: runs the simulation in steps with each click 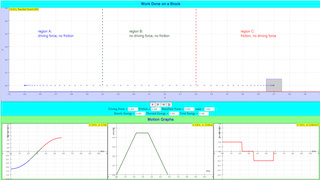