Harmonic and Anharmonic Oscillations of a Boat

Simple Harmonic Oscillation (SHO) is everyone’s favorite type of periodic motion. It’s simple, easy to understand, and has a known solution. But SHO is not the only kind of periodic motion. In this set of exercises we’ll investigate an anharmonic oscillator. We’ll explore characteristics of its motion, and try to get an understanding of the circumstances under which the motion can be approximated as simple harmonic.

This set of exercises guides students through the development of an anharmonic oscillator, then lets them use an ODE solver to plot the motion. It does not describe how to use an ODE solver. Emphasis is on qualitative understanding of the system, although if the instructor chooses it is certainly possible to use real parameters (, dimensions of boat, etc) to obtain an “engineer’s answer”.

The problem is accessible to first-year students, but it may also be of interest to students in higher-level courses.

There is opportunity to discuss limitations of the model on the final problem. In this problem, if the amplitude is high enough that the boat gets out of the water, the model in the ODE breaks down in interesting and spectacular ways.

The pseudocode, Mathematica notebook, python code, and sample solutions of this Exercise Set assume the use of built-in differential equation solving capabilities. Depending on instructor preference, it may be desirable for students to have experienced the direct application of a finite-difference algorithm to a variety of first-order differential equations before using a computational ‘black box.’

The simplest example of Simple Harmonic Oscillation (SHO) is a mass hanging on a spring. In equilibrium, the string will have stretched some equilibrium distance , so that the weight of the mass  is balanced by the spring force . Any additional motion  of the spring will result in an unbalanced force:

This last equation is in the form of the equation for SHO:

where  in this case. Knowing , we can then go on to do whatever we need to do with the problem. The period of the motion is , the position as a function of time will be , etc.

We can use this “known solution” to SHO any time we can get the equation of motion into the form of the SHO differential equation. If the second derivative of a variable is equal to a negative constant times the variable, the solution is SHO with  equal to the square root of that constant.

This equation is not SHO, but for small ,  so we can approximate the motion as SHO as long as the oscillations are small.

In the case of our wedge-shaped boat, the equation of motion is

Note: The Mathematica and Python solutions here make use of built-in tools for solving differential equations. For other implementations the reader is directed to Numerical Recipes in C, or equivalent text, which will provide an introduction and theoretical description of the numerical approach to solutions via finite-difference methods.

If we then push the boat down some additional distance  and let go, the boat will bob up and down.

Instead of a straight-sided boat, imagine a boat with a V-shaped hull profile, as shown below. 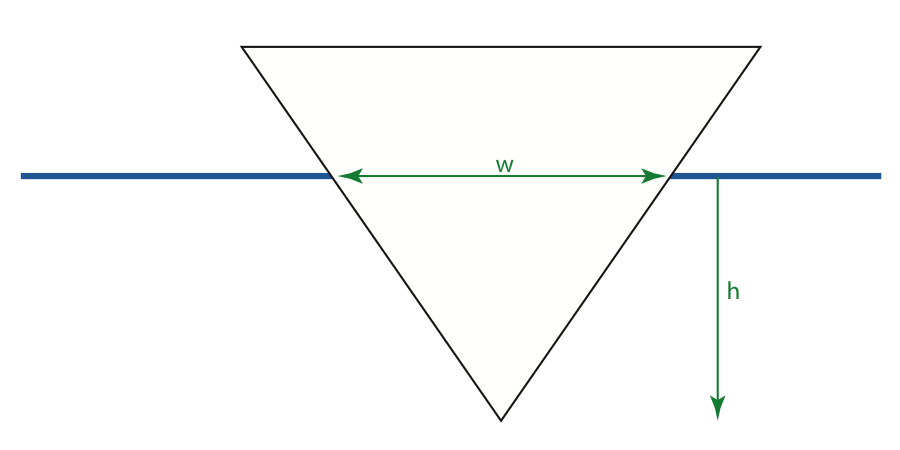 The width  of the hull at the waterline depends on the depth below waterline :

The volume of water displaced by this boat is the area of the triangle below water level, times the length of the boat:

A solution to the vertical motion of a V-hulled boat.

# Now set up the solutions.

# And now plot some things!

# Here's a low-amplitude one, should be approximately SHO.

For a boat with vertical sides, the equation of motion can be derived by starting with Newton’s second law:

where  is the area of the boat’s cross-section at the waterline.  is the equilibrium depth, so and

This is in the form of the equation for SHO, with

The period of the boat’s oscillation will be

The derivation for the V-hulled boat follows the same general procedure.

The equilibrium position is given by , so  and

This can be further simplified as

From that equation we can see that if  is small, then the motion is approximately SHO with

There are an awful lot of constants in that equation, so to simplify our numeric calculations let’s just redefine things.

We can also define the unitless variable , which allows us to rewrite the equation in (almost) unit-independent form:

That’s the equation we need to send through the ODE solver.

Setting different values of amplitude gives different behavior: for small amplitude () the result is nearly indistinguishable from SHO, but for larger values both the period and symmetry change. The figure below shows that at , the boat spends more time higher (the graph is inverted, since down is positive in our initial setup) and the period lengthens relative to the SHO approximation. 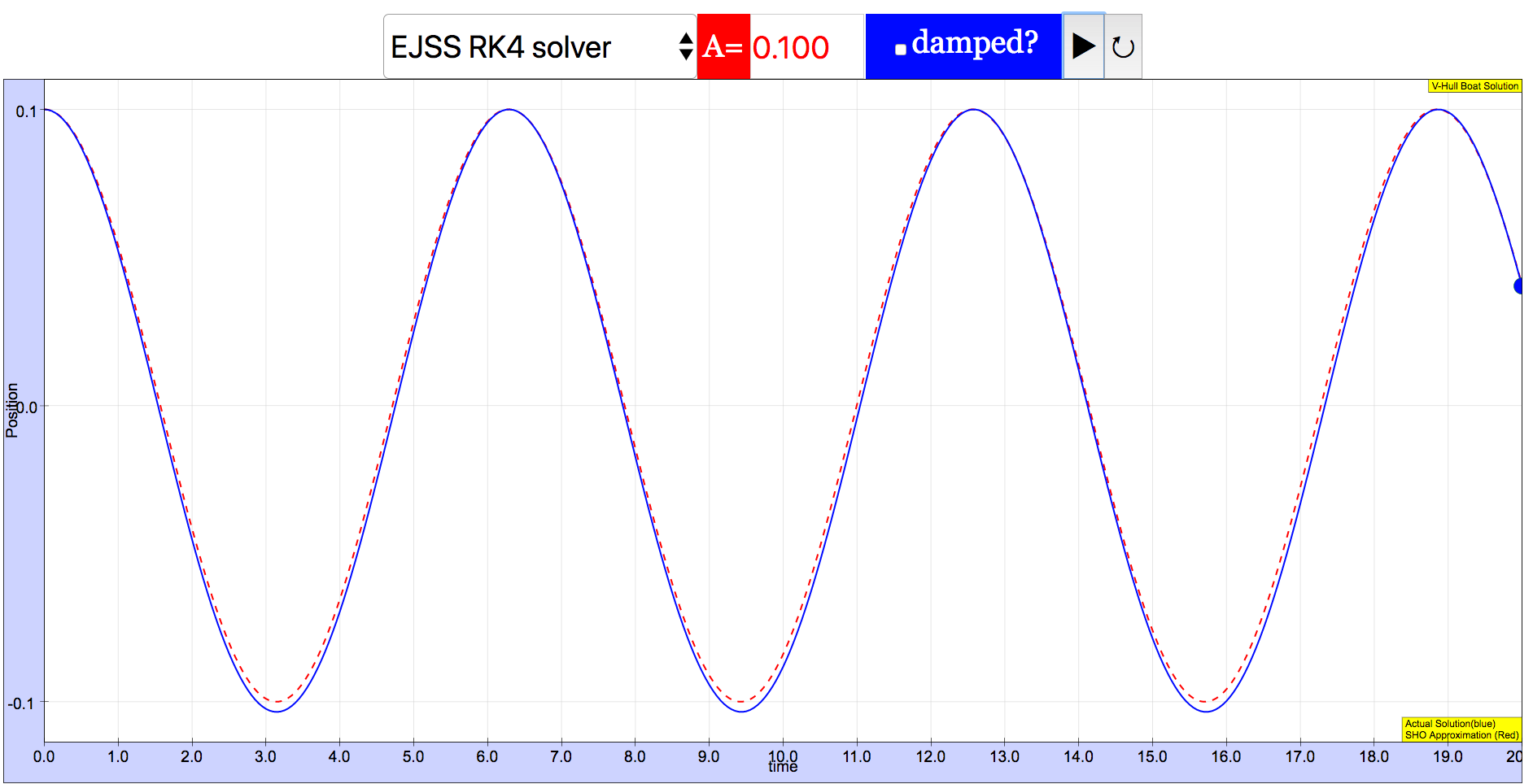 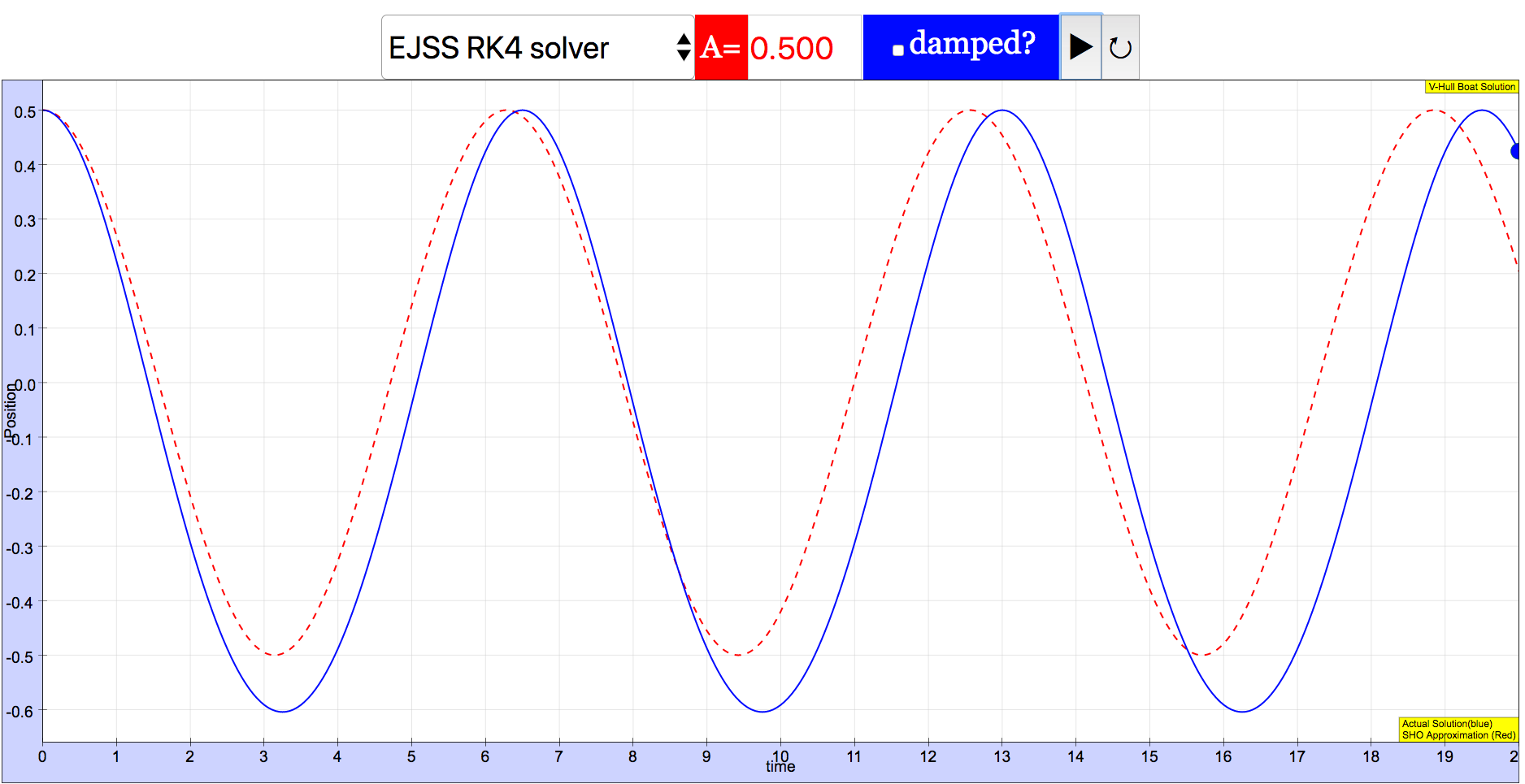 These effects are even more prominent at larger values of , as shown in the next figure. 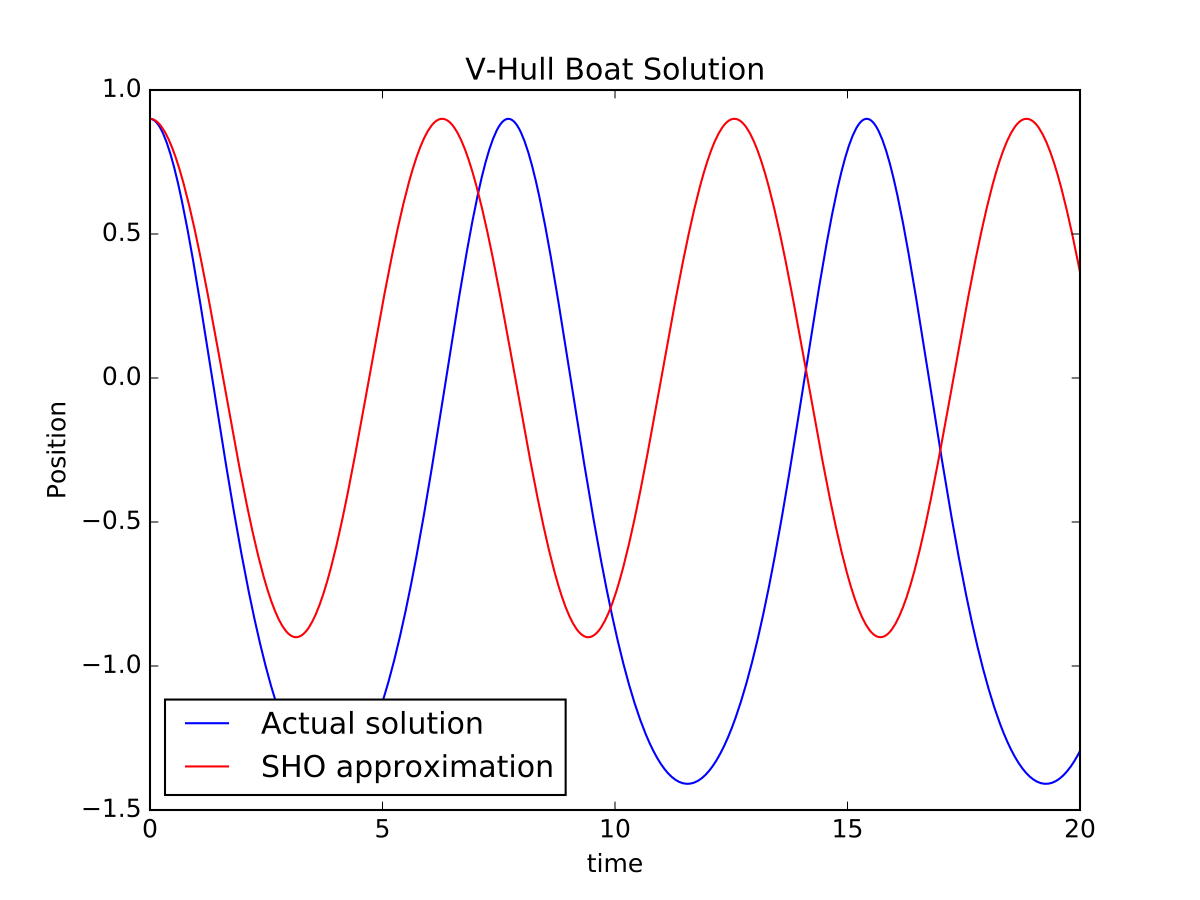 Adding damping is relatively easy: just add another force term in the definition of the ODE. Results are shown below. 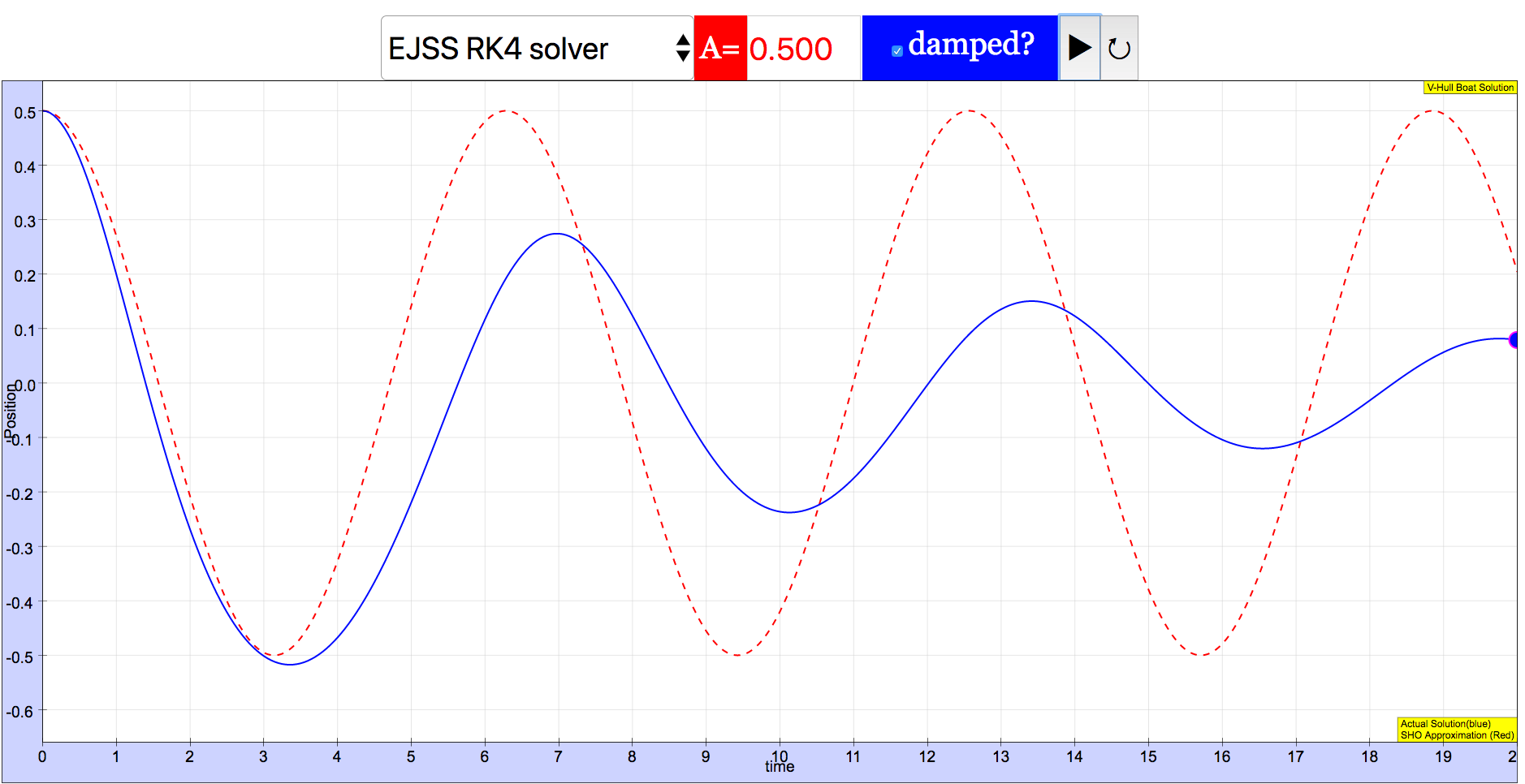 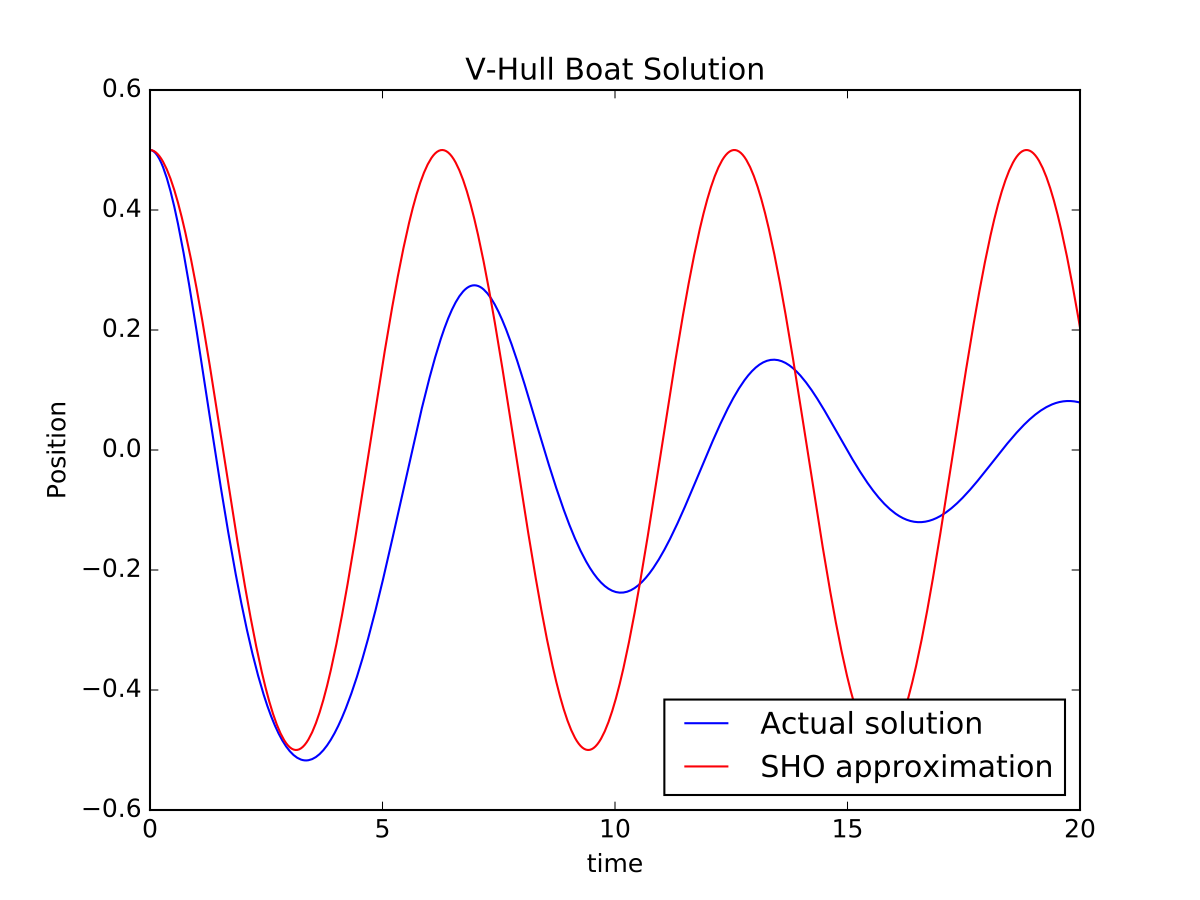 Adjust this to change the amplitude of the wave.

Toggling this will determine if the oscillation is damped or not.

Plays/Pauses and resets the simulation respectively.
That is all, do enjoy the simulation in the link below:
http://iwant2study.org/lookangejss/02_newtonianmechanics_8oscillations/ejss_model_PICUP_vhull_frem_v2/ 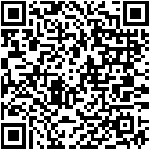