Fu-Kwun Hwang - Dept. of Physics, National Taiwan Normal Univ.; lookang (This email address is being protected from spambots. You need JavaScript enabled to view it.) This helps students learn
explain how a current-carrying coil in a magnetic field experiences a turning effect and that the effect is increased by increasing
(i) the number of turns on the coil,
(ii) the current
discuss how this turning effect is used in the action of an electric motor
describe the action of a split-ring commutator in a two-pole, single-coil motor and the effect of winding the coil on to a soft-iron cylinder

(j) deduce the relative directions of force, field and current when any two of these quantities are at right angles to each other using Fleming's left-hand rule

The external magnetic field Bz can be varied using the slider Bz. When Bz is positive, it is in the direction vertically up. Vary Bz until it is negative, what is the direction of the Bz then?
The current comes from the battery higher potential end and travels in a wire forming a closed circuit and travels back to the lower potential end of the battery. When θ = 0o current flows from the battery higher potential end, to the top brush, to the RED split ring, through the coil loop in order ABCD, back to BLUE split ring, bottom brush and lower potential end of the battery. What is the direction of the current flow in wire AB? What is the direction of the current flow in wire CD? using Fleming's left-hand rule, deduce the relative directions of force acting on i) AB ii) CD iii) BC iv) DA. hint: note that Fmag = I*B*L*sin(I&B) may be useful.
By taking moments about the axle PQ, consider the forces on AB and CD, deduce the direction of the torque and the motion if the coil loop was initially at rest (ω = 0 deg/s). Select the suitable sliders of your choice and verify your hypothesis for 2 angles. Discuss with your partner what you have discovered. Ask your teacher if there are any problem/issues faced using this virtual lab.
Explain and show the equations involving T ( in earlier part of question), why the forces on wire BC and DA did not contribute to the calculation of rotating torque about axle PQ?
By considering the forces in the x direction for wire BC and DA, suggest what can happen to the coil loop if the forces are large enough.  Suggest why it does not happen in terms of the  properties of the wires in the coil loop.
Explain how a current-carrying coil in a magnetic field experiences a turning effect and that the effect is increased by increasing (i) the number of turns on the coil, (ii) the current (iii) increasing the magnitude of the external Bz field
After conducting some inquiry learning on the virtual DC motor model discuss how this turning effect is used in allowing the coil loop to rotate. You may right-click within a plot, and select "Open EJS Model" from the pop-up menu to examine the model equations of the motion. You must, of course, have EJS installed on your computer.
Describe the action of a split-ring commutator in a two-pole magnet setup, single-coil motor. Suggest the effect adding a soft-iron cylinder in the winding the coil.

Please submit your remix model that model features that are not available in the existing virtual lab and share your model with the world through NTNUJAVA Virtual Physics Laboratory http://www.phy.ntnu.edu.tw/ntnujava/index.php?board=28.0. Impacting the world with your model today!

Direct Current Electrical Motor Model
Electric motors turn electricity into motion by exploiting electromagnetic induction. A current-carrying loop that is placed in a magnetic field experiences a turning effect.A simple direct current (DC) motor is illustrated here. ABCD is mounted on an axle PQ. The ends of the wire are connected to a split ring commutator at position X & Y. The commutator rotates with the loop. Two carbon brushes are made to press lightly against the commutators.
The motor features a external magnet (called the stator because it’s fixed in place) and an turning coil of wire called an armature ( rotor or coil, because it rotates). The armature, carrying current provided by the battery, is an electromagnet, because a current-carrying wire generates a magnetic field; invisible magnetic field lines are circulating all around the wire of the armature.
The key to producing motion is positioning the electromagnet within the magnetic field of the permanent magnet (its field runs from its north to south poles). The armature experiences a force described by the left hand rule. This interplay of magnetic fields and moving charged particles (the electrons in the current) results in the magnetic force (depicted by the green arrows) that makes the armature spin because of the torque. Use the slider current I to see what happens when the flow of current is reversed. The checkbox current flow & electron flow alows different visualization since I = d(Q)/dt and Q= number of charge*e. The Play & Pause button allows freezing the 3D view for visualizing these forces, for checking for consistency with the left hand rule .

The purpose of the commutator is to reverses the direction of the current in the loop ABCD for every half a cycle.
A swing back and fro motion (maybe θ = 90o increase to 270o and decrease back to 90o) is all you would get out of this motor if it weren't for the split-ring commutator — the circular metal device split into parts (shown here in teal with a gap of β2) that connects the armature to the circuit.

A electric motor is a device for transforming electrical energy into mechanical energy; an electric generator does the reverse, using mechanical energy to generate electricity. At the heart of both motors and generators is a wire coil in a magnetic field. In fact, the same device can be used as a motor or a generator.

When the device is used as a motor, a current is passed through the coil. The interaction of the magnetic field with the current causes the coil to spin. To use the device as a generator, the coil is spun, inducing a current in the coil.

Let's say we spin a coil of N turns and area A at a constant rate in a uniform magnetic field B. By Faraday's law, the induced emf is given by:

B and A are constants, and if the angular speed w of the loop is constant the angle is:
θ = wt

The induced emf is then:

Spinning a loop in a magnetic field at a constant rate is an easy way to generate sinusoidally oscillating voltage...in other words, to generate AC electricity. The amplitude of the voltage is:
εo = wNBA

To generate DC electricity, use the same kind of split-ring commutator used in a DC motor to ensure the polarity of the voltage is always the same. In a very simple DC generator with a single rotating loop, the voltage level would constantly fluctuate. The voltage from many loops (out of synch with each other) is usually added together to obtain a relatively steady voltage.

Rather than using a spinning coil in a constant magnetic field, another way to utilize electromagnetic induction is to keep the coil stationary and to spin permanent magnets (providing the magnetic field and flux) around the coil. A good example of this is the way power is generated, such as at a hydro-electric power plant. The energy of falling water is used to spin permanent magnets around a fixed loop, producing AC power.

on an eariler Java version

ollection of photo taken by Kai Suah on a pilot lesson April 29th  2011 to test the worksheet and simulation, thanks bro! 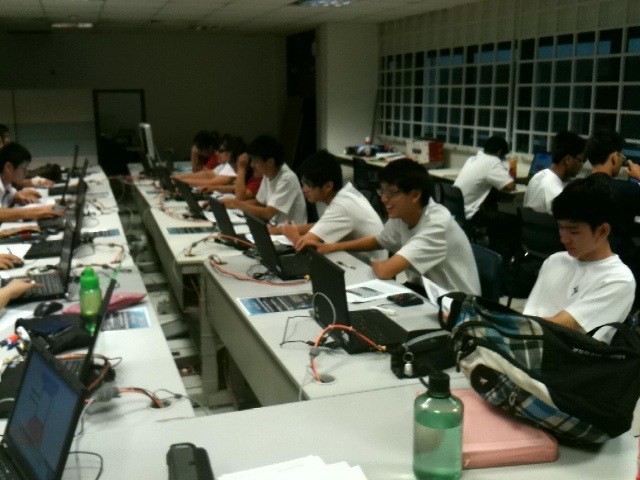 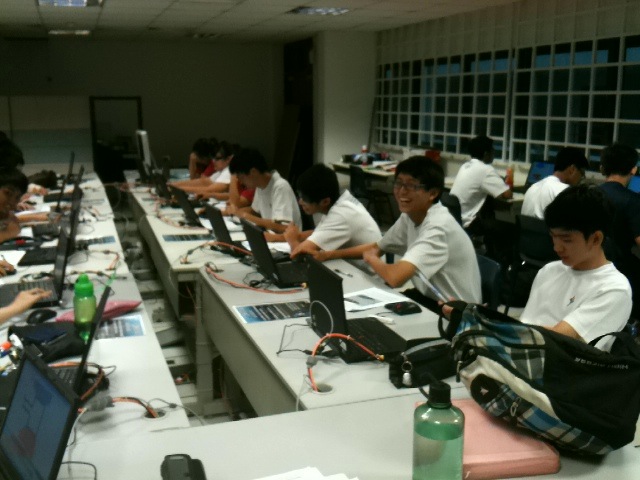 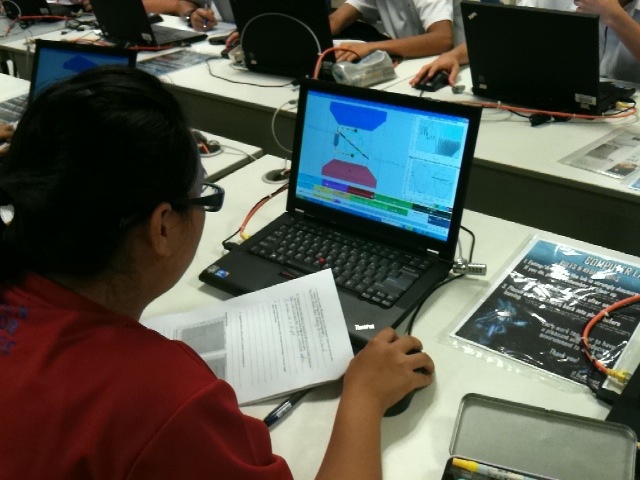 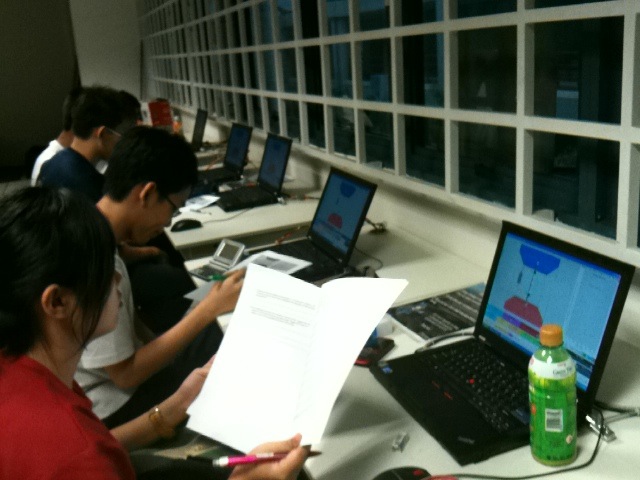 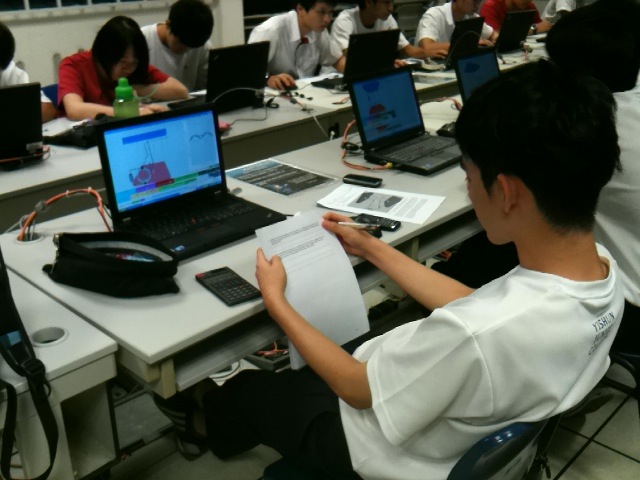 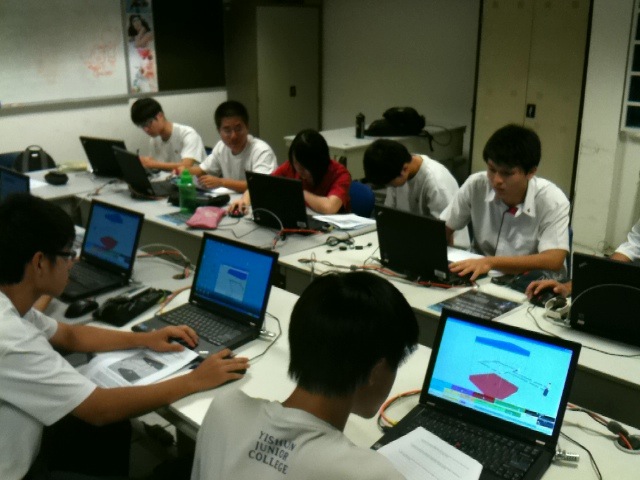 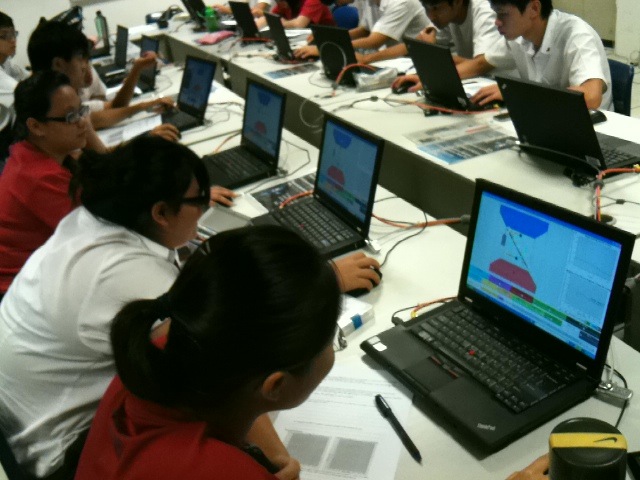 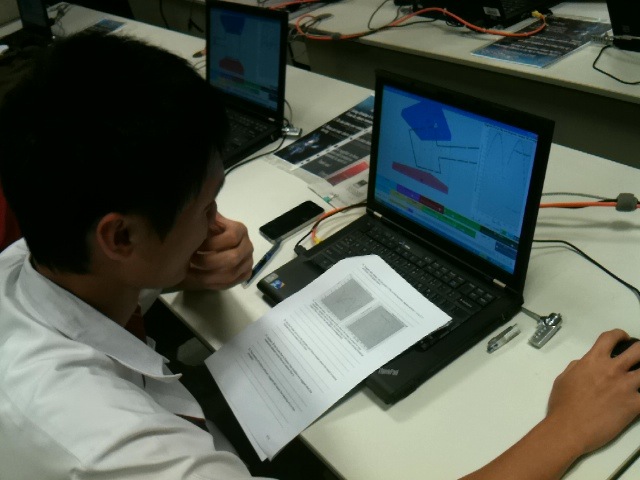 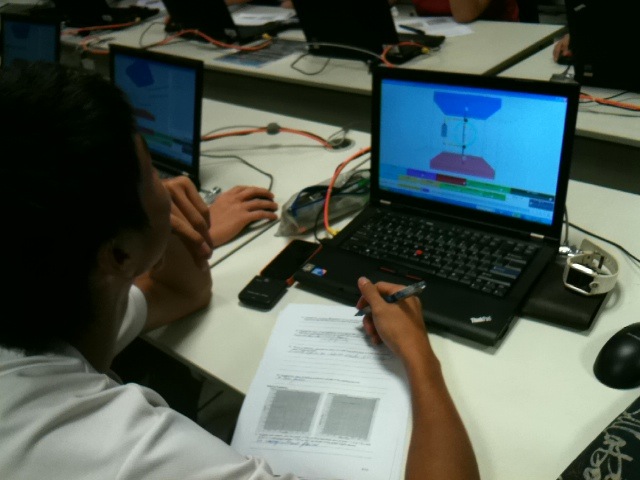 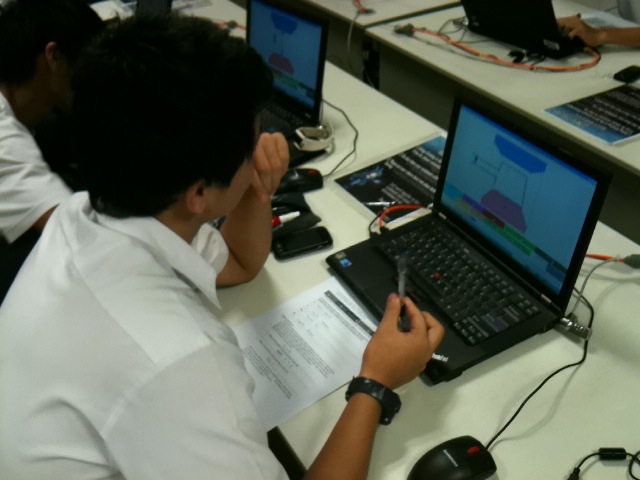 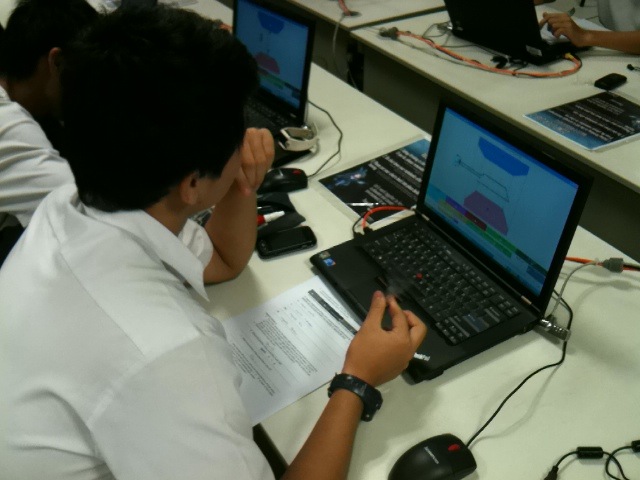 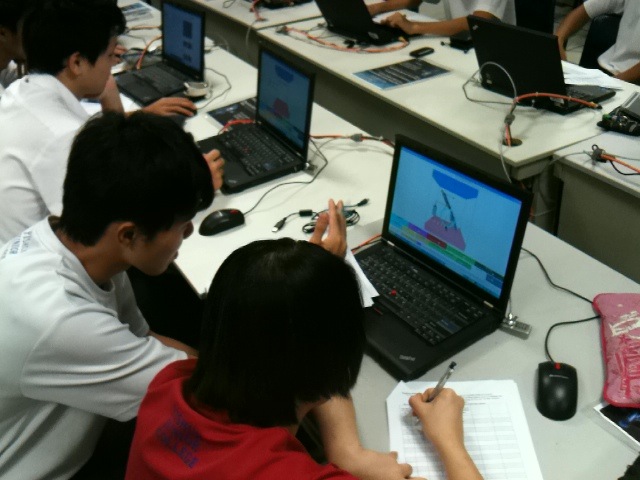 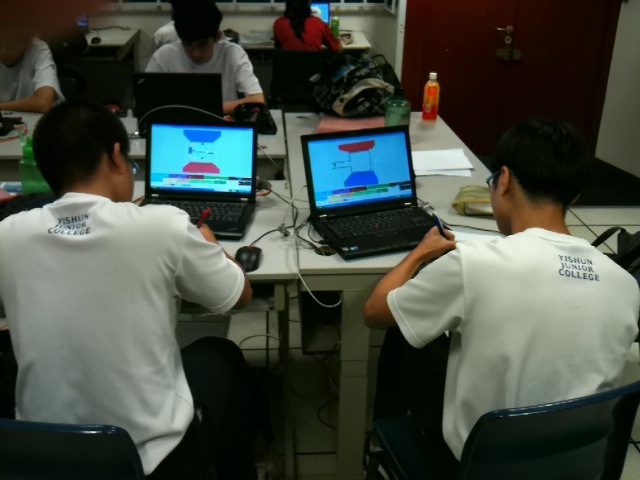 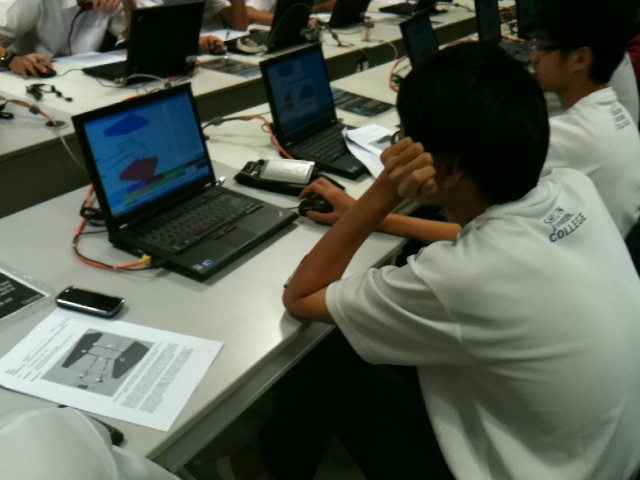 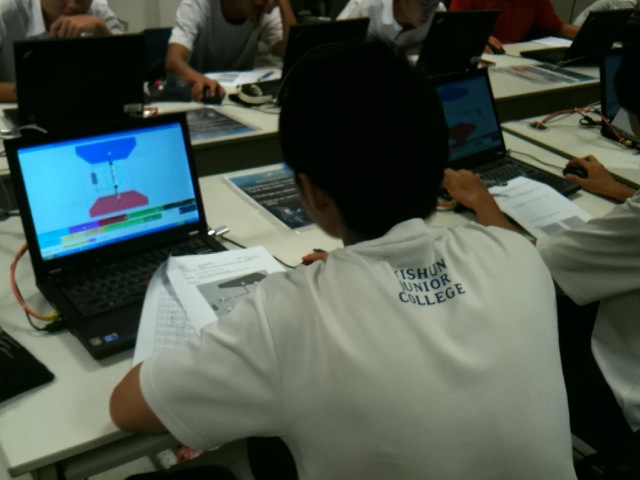 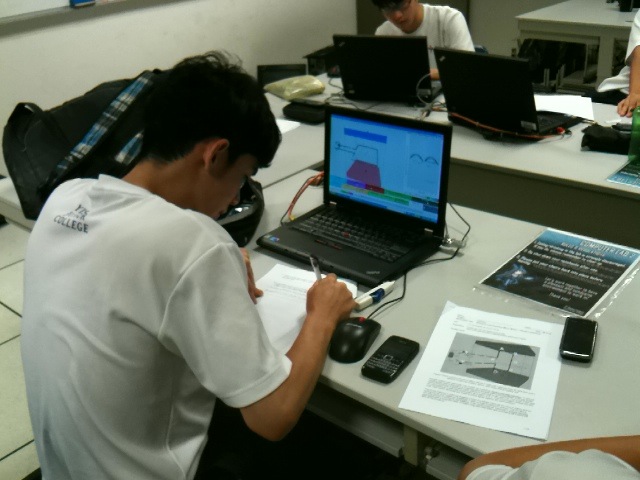 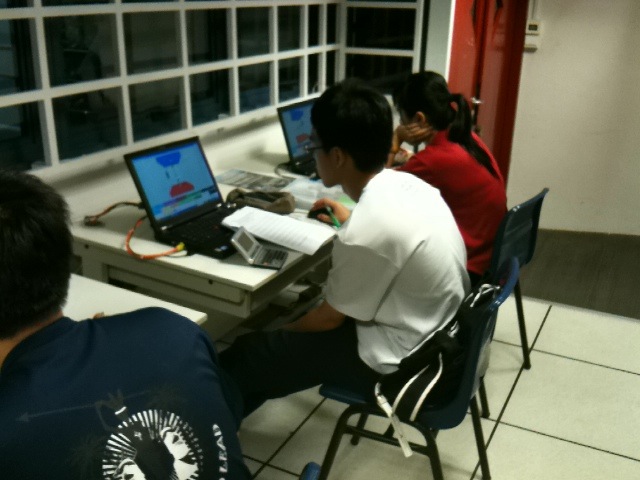 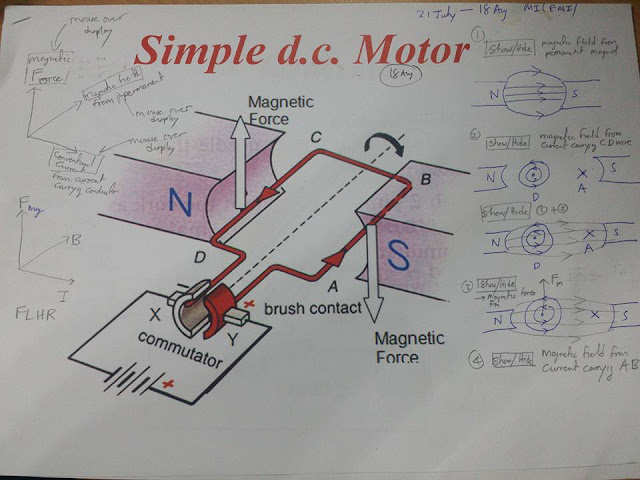 by using these 2 simulations separately, it is possible to achieve the look in the notes.

thus, i will not force the 2 simulations together as the handphone display cannot be optimised with 2 such layouts.

Use alternate Tab in your chrome browser, to play both both simulations!