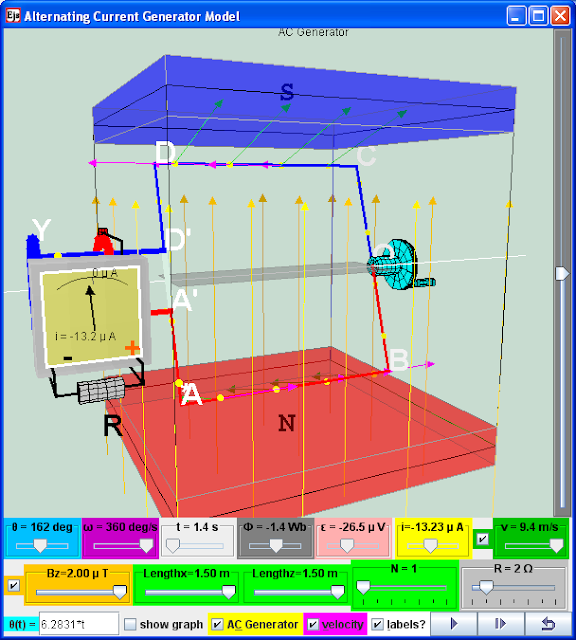 Electric generators turn motion into alternating-current electric power by exploiting electromagnetic induction. A loop that is placed in a magnetic field induces an motional electromagnetic force (emf). A simple alternating current (AC) generator is illustrated here. ABCD is mounted on an axle PQ. The ends of the wire of the loop are connected to 2 brushes contacting two slip rings continuously at position X & Y. Two carbon brushes are made to press lightly against the slip rings.

The motor features a external magnet (called the stator because it’s fixed in place) and an turning coil of wire called an armature ( rotor or coil, because it rotates). The armature induces an emf, because any change in the magnetic environment of a coil of wire will cause a voltage (emf) to be "induced" in the coil.

The key to producing motional emf is in change in the magnetic flux experienced by the coil loop.

|ε|  is the magnitude of the electromotive force (emf) in volts

Φ is the magnetic flux through the circuit (in webers).

A is area of coil

Lenz's law states an induced current is always in such a direction as to oppose the motion or change causing it.
The law provides a physical interpretation of the choice of sign in Faraday's law of induction, indicating that the induced emf and the change in flux have opposite signs. The the polarity of the induced emf is such that it produces a current whose magnetic field opposes the change which produces it

For the case of a rotating loop,

the physical setup of Bz and normal vector of area A when t = 0 s, such that angle B&A = ( θ + π/2 ).
and taking out the constants from the differential equation,

To derive an expression for the induced emf across the slip rings when the coil is spun at a angular frequency, ω, knowing θ = ω.t

When mechanical energy is used to rotate the loop, the armature induced a emf described by the right hand rule. The induced emf in a coil is equal to the negative of the rate of change of magnetic flux times the number of turns in the coil.

Use the rotating handle function input field θ(t)= _________ to see what happens when the rotating handle cranks the loop in the Bz magnetic field. The checkbox current flow & electron flow alows different visualization since I = d(Q)/dt and Q= number of charge*e. The Play & Pause button allows freezing the 3D view for visualizing these induced currents, for checking for consistency with the right hand rule.

Engage:
Question: Given the context of global energy crisis, fossil fuel as primary source of energy and its effects of global warming, are you aware of any alternative energy source?
Possible student responses: Many students probably already know of clean energy and able to verbally mention some of them such as wind and wave energy.
Answer: Yes! Wind energy and wave energy are examples of energy sources that convert mechanical sources of energy and convert it to electrical energy. Later, we will demonstrate a way to convert human mechanical energy in the form of rotating an axle to rotate a coil so as to get electrical energy.
A real live demo is best. 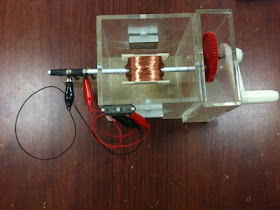 Explore
1. Explore the simulation; this simulation is designed as an electric generator that turns motion into alternating-current electric power by exploiting electromagnetic induction. This AC generator model consists of 2 pole magnets and a wire (usually a very long one that's wrapped to form several coils and known as an armature or coil). A hydraulic engine or some other outside source of motion (This applet has a handle bar for you to rotate) moves the wire or armature through the external magnetic field created by the magnets.
2 The play button runs the simulation, click it again to pause and the reset button brings the simulation back to its original state.
3 by default values Bz, Lengthx, Lengthz, N, R, ϑ  = 6.2831*t  play the simulation. Notice ϑ  = 6.2831*t  is the angular displacement function of the handle bar. The wire is in a rotation motion and the galvanometer display the induced current in the AC generator. What is the physics principle simulated here.
Hint: Faraday's law
4 reset the simulation.
5 using the default values (Bz, Lengthx, Lengthz, N, R,), adjust the value of ϑ  = 1*t   play the simulation. What did you observe? Explain the motion in terms of the ϑ, ω
6 explore the slider Bz. what do this slider control?
7 explore the slider Lengthx. What does this slider control?
8 explore the slider Lengthz. What does this slider control?
9 together a variable called A is defined as Lengthx*Lengthz, suggest a suitable meaning for A.
10 by leaving the cursor on the slider, tips will appear to give a description of the slider. You can try it the following sliders such as the N, R, t, Φ , ε , i, v.
11 record down the names of the variables and its meaning from the tips.
9 there are some value of time of simulation t and the checkbox graph for height vs time.
10 vary the simulation and get a sense of what it does.
11 There is an external magnet with the poles as setup in the z axis direction.
What are the magnetic poles when Bz is positive?
12 What can you conclude about the directions of the magnetic field exerted by the magnets?
hint: the magnetic field vectors comes out from which pole when view from outside the magnet.

13 The external magnetic field Bz can be varied using the slider Bz. When Bz is positive, it is in the direction vertically up. Vary Bz until it is negative, what is the direction of the Bz then?

Evaluate:
14 Input into the input field θ(t) = __6.2832*t___
When θ = 0o What is amount of magnetic flux Φ passing through the area of the coil loop is zero Wb.
15 Step the simulation by dt, take note of the new value of the θ and the new Φ reading. By calculating d(Φ)/ dt, at this instant in time. Think of a way, to collect the data to fill in the following table.
Select the Checkbox "Show Graph" and record down the value of the emf ε. Suggest a relationship between emf ε and the variables in the table. Collect more data to fill in the table if need.Elaborate:
16 The following passage (just an example) aims to aid learners describe a simple form of a.c. generator (rotating coil or rotating magnet) and the use of slip rings (where needed)When a coil is _______________ between the poles of the ___________, its wires cut through the _______________ causing an induced emf to be generate which causes a ____________ to flow if there is a closed electrical path circuit.
The _________ and ______________ of the induced current _____________ as the coil rotates. This is the basic principle behind the simple AC generator.(c) Sketch a graph of voltage output against time for a simple a.c. generator
Using default starting values of the simulation, play the simulation until at θ = 0 degree again at t > 0.0 s
What is the direction of the current flow in wire AB?
What is the direction of the current flow in wire CD?
using Fleming's left-hand rule, deduce the relative directions of force acting on
i)                    AB
ii)                   CD
iii)                 BC
iv)                 DA.
Hint: note that Fmag = I*B*L*sin(I&B) may be useful.By taking moments about the axle PQ, consider the forces on AB and CD, deduce the direction of the torque T and the motion if the coil loop was initially at rest (ω = 0 deg/s). Select the suitable sliders of your choice and verify your hypothesis for 2 angles.
Discuss with your partner what you have discovered.
Ask your teacher if there are any problem/issues faced using this virtual lab.Explain and show the equations involving T ( in earlier part of question), why the forces on wire BC and DA did not contribute to the calculation of rotating torque about axle PQ?By considering the forces in the x direction for wire BC and DA, suggest what can happen to the coil loop if the forces are large enough.  Suggest why it does not happen in terms of the properties of the wires in the coil loop.Explain how a rotating coil in a magnetic field experiences a change in magnetic flux linkage and the induced emf.
What is the effect on the induced emf by increasing
(i)                  the number of turns on the coil, N
(ii)                the angular velocity, ω
(iii)               the magnitude of the external Bz field.
After conducting some inquiry learning and examining the 3D view of the model on the virtual AC generator model discuss how this induced emf can be measured. You may right-click within a plot, and select "Open EJS Model" from the pop-up menu to examine the model equations of the motion. You must, of course, have EJS installed on your computer.Describe the action of the slip rings of the AC generator. Suggest the effect of adding a soft-iron cylinder in the winding the coil.Advanced Learner:
Please submit your remix model that model features that are not available in the existing virtual lab and share your model with the world through NTNUJAVA Virtual Physics Laboratory http://www.phy.ntnu.edu.tw/ntnujava/index.php?board=28.0. Impacting the world with your model now.

Alternating current (a.c.) generators are devices that convert mechanical energy to electrical energy. In its simplest form, it consists of a loop of wire rotated by some external means in a magnetic field (as shown in the diagram below). In commercial power plants, the energy required to rotate the loop can be derived from a variety of sources (e.g. for hydroelectric plant, falling water is directed against the blades of a turbine to produce the rotary motion). 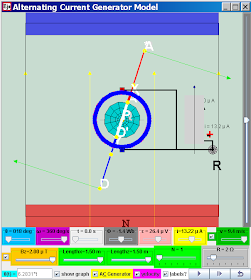 figure of AC generator with Bz vertical up and the angle θ=18 deg here is the angle of coil wrt to the z axis
vector area A is therefore in this case,  angle θ+90
therefore the angle θ (notes) below is angle θ+90 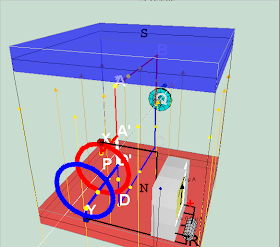 therefore, the θ here in the picture is angle θ+90 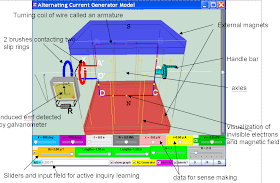 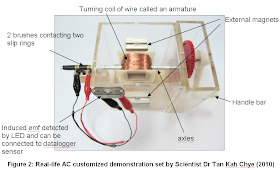 • As the wire loop rotates, its magnetic flux linkage changes with time. By Faraday’s law of electromagnetic induction, this will induce an e.m.f. and a current in the loop. The ends of the loop are connected to slip rings that rotate with the loop. Connections from these slip rings, which act as output terminals of the generator, to the external circuit are made by stationary brushes in contact with the slip rings.

If the coil is turning at a constant rate, then θ = ω.t where ω = the angular frequency. 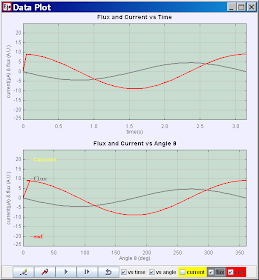