where the expansion coefficients cn satisfy Σ cn|2 = 1. Depending on how many of the coefficients cn are non-zero, one may have an energy eigenstate, a two-state superposition, or even an initially localized (usually Gaussian shaped) wave packet.

Although the metric (MKS) system of units has become the standard international system of units, it is not well suited for computation if the quantities being computed are very large or very small. Quantum phenomena occurs on the microscopic scale at very fast times and computations are usually done using an atomic system of units in which the reduced Plank's constant ħ, the Bohr radius ao, and the mass of the electron m are set equal to unity. The one-dimensional time independent Schrödinger equation in these units is:

The Bound Energy Eigenstate Superposition JavaScript simulation was developed by Wolfgang Chrsitian using the Easy Java/JavaScript Simulations (EjsS) modeling tool. You can examine and modify this simulation if you have EjsS version 5.2 or above installed by importing the model's zip archive into EjsS. Information about EjsS is available at: <http://www.um.es/fem/Ejs/> and in the OSP ComPADRE collection <http://www.compadre.org/OSP/>.

The following Options cannot work on SHO (but works if system=ISO):

[Screen shot of an ISW superposition state that as it hits one side of the well.]

You can access the pre-set initial states for the infinite square well (ISW) via the textbox on the lower-left-hand side of the main simulation panel.  These show:

1. Given the default infinite square well width of a = 1.57 = π/2, what are the ground-state and first-excited-state energies?  Recall that we have scaled the problem such that ħ = m = 1.

2. Since the time dependence of energy eigenstates is just, e-iEnt/ħ, how long does it take the ground state and the first-excited state to evolve in time back to their t = 0 values? In other words, with what period do these states oscillate with time? Once you have these values compare them to each other.

4. Now select one of the ISW Gaussian wave packets (ISW Gaussian, ISW Narrow Gaussian <p>0 = 0, ISW Narrow Gaussian <p>0 = 80 π/a) from the drop down menu. First look at all three wave packets. Describe the similarities and differences between the packets' initial shapes. Choose one packet and set the dt to the ground state period divided by 100 and run the simulation. Describe the motion of each wave packet. Which packet initially behaves like a particle in a classical infinite square well?

The infinite square well (ISW) is an idealized model consisting of a point mass m inside an infinitely deep well of width a.  According to quantum mechanics, the energy eigenfunctions ψn(x) for a symmetric ISW are simple sinusoidal functions

The angular frequency ω=(K/m)½ is that of a classical mass on a spring with spring constant K.  Substituting these SHO eigenfunctions ψn(x) into the time-independent Schrödinger equation shows that they have energy eigenvalues En that scale as the principal quantum number n

In order to compare ISW and SHO eigenfunctions, the spring constant is chosen so that the ground state energy eigenvalues of these two systems are equal. 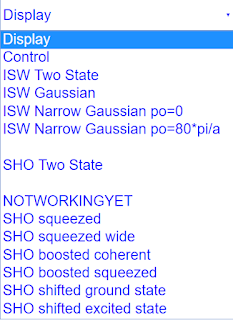 Toggling the display will change the type of graph shown.

Control allows you to change the change in time and the width of the bounded region. 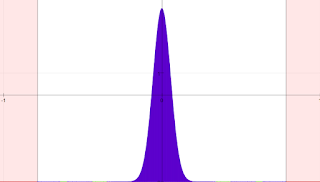 Double clicking anywhere in the panel will toggle full screen.
Note that it won't work with the simulation is playing.