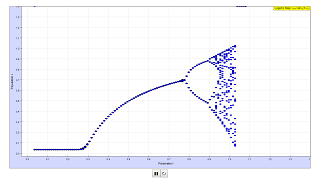 The logistic equation was first proposed by Robert May as a simple model of population dynamics. This equation can be written as a one-dimensional difference equation that transforms the population in one generation, xn, into a succeeding generation, xn+1.

Because the population is scaled so that the maximum value is one, the domain of x falls on the interval [0; 1].

The behavior of the logistic equation depends on the value of the growth parameter, r. If the growth parameter is less than a critical value r<0.75..., then x approaches a stable fixed value. Above this value for r, the behavior of x begins to change. First the population begins to oscillate between two values. If r increases further, then x oscillates between four values, then eight values. This doubling ends when r > 0.8924864... after which almost any x value is possible.

The logistic series rule sets the next generation proportional to the existing one in its first term. This alone would lead to exponential growth for r > 1/4, and to exponential decline for r < 1/4). The second term introduces a diminution that depends on the square of the existing population (note that in the above formulation xn < 1 , hence xn2 < xn ).

The issue for a given growth rate r is:  will the population approach a stable equilibrium (limit) value of linear growth and quadratic extinction − assuming an unlimited number of generations under identical conditions. If so, how does the equilibrium value depend on the growth rate r ?

In the simulation r is increased in steps of 0.001 in the range 0 < r < 1 . The calculation for each step starts with a random value 0 < x1< 1 . In a calculation loop 2000 members of the series are calculated. The first ones differ largely in dependence on the random initial value. Therefore the first 1000 iterations are suppressed in the chart. For each step in r 1000 points on the ordinate could represent the iterations 1000 to 2000.

In the range 0.25 < r < 0.75 the iterations are so close together that they appear as one point only, resulting in a "limit curve" in dependence on r.

Quite surprisingly between the "filled" bands there are some quasi "empty" bands with only a few accumulation points.

The determining term is the product 4r; factors different from 4 just scale the abscissa differently.

It is not decisive for the bifurcation that the limiting term is exactly (1-xn). The crucial point is the nonlinearity of the conjunction xn -xn2.

To demonstrate this, a generalized series rule is used in this simulation, using a term (1-xnk), with k > 0 :

After Stop k can be changed in the range 0.1 < k < 2 by a slider. The abscissa scaling is adjusted automatically.

The left chart displays the total range, the right one that of bifurcation with higher resolution. One can differentiate the calculation steps and the bifurcation structure in more detail if the window is expanded to full screen size.

Generalized by Dieter Roess in August 08

where x represents the ratio of the existing population to the maximum possible population, n represents the number of iterations, and r is a parameter ranging between 0 and 4 that changes the behaviour of the population growth.In this simulation, we denote the parameter r by 4r, where r now ranges between 0 and 1. From here on, when we refer to r, we mean the r in the simulation that ranges between 0 and 1.This model simulates the effects of reproduction, where the population size increases at a rate proportional to the current population when the population is small, and starvation, where the population size decreases at a rate proportional to the carrying capacity of the environment.It is not decisive for the bifurcation that the limiting term is exactly (1-x(n)). The crucial point is the non-linearity of the conjunction x(n) -x(n)^2.To demonstrate this, a generalised series rule is used in this simulation, using a term (1-x(n)^k), with k > 0 :x(n+1) = 4rx(n)(1-x(n)^k)When r is approximately 0.89 to 1, the population size starts to exhibit chaotic behaviour, fluctuating wildly between many values. In fact, the Logistic Map is commonly used to show how chaotic systems can arise from seemingly simple models. 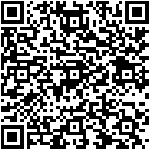