Developed by A. Titus

In a contemporary, yet classic survival story, The Martian documents the struggle of astronaut Mark Watney to withstand the barrage of life-ending threats thrown by Mars. Although science fiction, author Andy Weir weaves physics, astronomy, botany, engineering, and chemistry into the book. One of the topics Weir deftly describes is the challenge imposed by traveling to Mars.

This set of activities focuses on the rocket’s orbit around the Sun, the “ideal” time to launch a rocket, and the initial conditions needed for the rocket to arrive at Mars. Students will determine the time between possible launches to Mars and the time required for the rocket to travel to Mars after launched.

There are two factors of Mars exploration explored by this activity:

The Euler-Cromer method can be used to compute the orbits. Thus, this activity is accessible to introductory physics students who have already modeled constant force motion. However, the activity can be extended for students in intermediate mechanics who might compute the motion of the rocket during launch.

Finding the day to launch and the initial direction to launch requires trial and error. It is possible to change parameters and re-run the simulation. However, it may be desirable to have an interface by which one can adjust the parameters and more easily rerun the simulation. This GlowScript simulation trip-to-Mars shows how you can use a second window to interactively set the initial velocity of the rocket using your mouse to adjust an arrow. Then, you can click a button on the day of launch. However, this kind of interactivity is not built into the attached template and sample code.

JPL’s Horizons web interface can be used to obtain initial velocity and position of Mars and Earth on today’s date. If you do not wish to obtain new data, you can use data obtained on Aug. 29, 2015.

Exercise 1 leads students through the exercise of obtaining this data for whatever date they want.

According to Newton’s law of gravitation, the gravitational force by particle  on particle  is attractive and directed along a line between the masses with a magnitude

In the first activity, you will determine the time that the relative position of Earth with respect to Mars repeats. This is called the synodic period of Earth and Mars. You will write a simulation of Earth and Mars and will find the time between Earth-Mars-Sun alignment (also called a Mars opposition.)

In the second activity, you will launch a rocket to Mars and measure the time required for the trip.

For a rocket launched to Mars, there are three gravitational forces on the rocket:

Write a simulation of Mars and Earth orbiting the Sun. You can neglect the interaction of Earth and Mars and only calculate the gravitational force by the Sun on each planet.

For the initial positions and velocities of the planets in your simulation, use JPL’s Horizons web interface. Here are the instructions for using Horizons.

Run your simulation and use it to determine the time (in days) between Mars oppositions, as shown below. 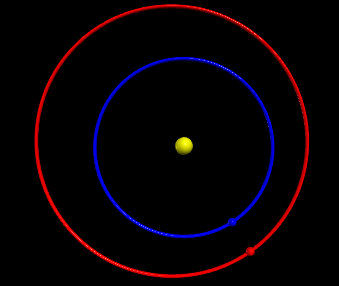 You will eventually add a rocket to the simulation you wrote in Exercise 1, and you will find the direction of launch and day of launch that takes the rocket to Mars. However, we must first decide on the initial speed and position we should give the rocket.

To find the initial speed, we will assume:

Using these assumptions and the Energy Principle, find the speed of the rocket when it is at an altitude of . What other assumptions did you make?

Depending on the particular orbit, it can take from 130 to 330 days to reach Mars. For NASA’s Mars missions, the average travel time is approximately 225 days, or about eight months. This is a long time, so you should definitely pack snacks and movies. The Mayflower took just over two months to cross the Atlantic. The journey to Mars is about four times longer than the Pilgrims’ journey from Europe to North America.

We will not model the rocket as its boosters are firing. Instead, we will set the initial velocity of the rocket as 5.4 km/s at a distance of 5.6 earth radii () from the center of Earth. (This is an altitude of  from Earth.) Then we will try various launch days and launch directions for the rocket at this distance from Earth.

In writing your simulation, use the following assumptions:

Find a direction for the initial velocity of the rocket and find a day to launch (using the initial positions of the planets in Exercise 1) such that the rocket travels to Mars. Your program will have to compute orbits for the rocket, Earth, and Mars. You will have to try many different combinations of launch day and launch direction. Use trial and error, but learn from each trial to improve your guesses.

Also, think about what it means to “arrive at Mars.” Does it have to collide with Mars or merely get close enough that rocket boosters could conceivably change the orbit of the rocket?

Try different initial velocities and different days for the launch. Can you find more than one velocity and day that will give an orbit that will work?

The second opposition is at Day 1107.

The difference is 831 days, which is approximately 27.7 months.

The mass of Earth is  kg. Its radius is  m. The rocket is initially close to Earth so . Use the Energy Principle to find the speed of the rocket at . Define the system to be Earth and rocket. Assume there is no work or heat transferred to the system. Also, assume that the rocket’s interactions with the Sun and Mars are negligible during this change in altitude from Earth.

The rocket arrives on June 25, 2016. This gives a travel time of 176 days which is approximately 6 months. The arrival is shown below (although “arrival” is defined as being within 200 Mars diameters.)

It is worth comparing this result to actual missions. Space.com has an article that gives the following travel time for Mars missions.

There are many solutions to this problem and it’s hard! Defining a large region of success for “reaching” Mars (like a radius of 500 Mars Diameters) is helpful.

It is best to collect data from the class on all of their successful orbits.

rinitial=5.6*6.4e6 #initial distance of rocket from center of earth

#pos and vel generated by http://ssd.jpl.nasa.gov/horizons.cgi

#diameters used for drawing sun, mars, and earth; diameters are not to scale

scene.append_to_title("""<br>Click the simulation to begin.""")

scene.append_to_title("""<br>3. The thrusters are off during the entire flight. The net force on the rocket is the gravitational force by the Sun, Earth, and Mars.<br><br>""")

#this function is called when the rocket is launched

# initial positions, velocities, and momenta of all objects

# pause and then change the message

#if not launched, just make the rocket at earth's position

#launch rocket on the launch day 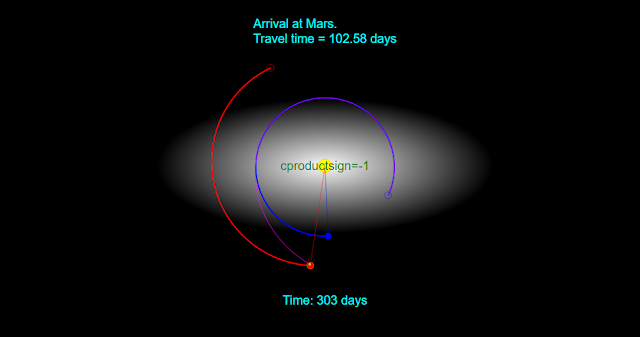 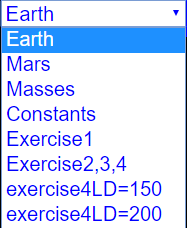 Toggling between the combo box will set their respective functions.

Selecting the first four options will give you fieldboxes to adjust their variables respective.
Selecting Exercise 1 will show the cproduct sign

Selecting the other Exercises will show you the Launch Rocket Settings 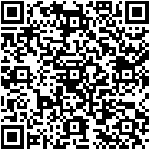