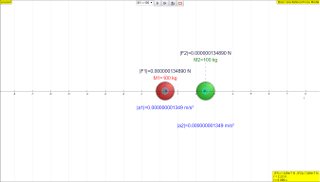 Gravitation is a natural phenomenon by which physical bodies attract each other due to their masses. This force occurs whenever masses are present and the two bodies need not to be in contact with each other. It is however the weakest of the fundamental forces of nature.

In 1687, Sir Isaac Newton concluded that this non-contact gravitational force must be as responsible for the falling of the apple from a tree as it is the cause for the rotation of the Moon about the Earth. Hence he published the Newton’s law of gravitation which states that: 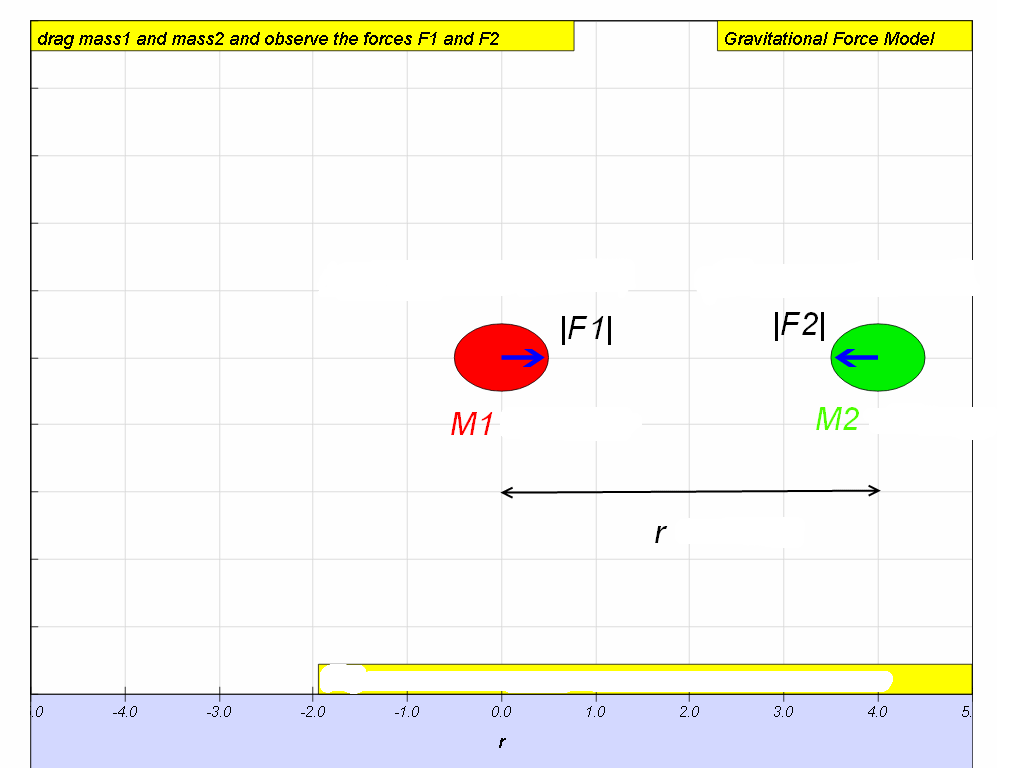 This means that if there are two point masses M and m and they are separated by distance r, the magnitude of the gravitational force attracting them to each other is   where G, the constant of universal gravitation, is  (will be given in data & formulae list during tests and examinations).

What can you conclude about the two forces in the simulation below? How can we express the gravitational interaction between objects in the Universe?

2. Field near to the surface of the Earth

• The acceleration of free fall for a body near to the Earth is constant and is approximately 10 m/s2 .

Students’ prior knowledge of Dynamics and Gravitational field

Students learn about mass (a measure of the amount of matter in a body) and volume (the amount of space that a body occupies) and the use of appropriate apparatus to measure these quantities (e.g. use of a lever balance, an electronic balance, a measuring cylinder, a syringe, and a measuring jug). However, the concept of density is not introduced although students do simple experiments to investigate the ability of objects of different materials (plastics, wood, rubber and metals) to float/sink in water.

Students recognize that objects have weight because of the gravitational force between them and the Earth and that weight is different at different places, and can be measured using a spring balance or a weighing scale.

• the density of a substance is the mass of the substance per unit volume, and can be used to predict whether objects sink or float.

• gravity exists between any two objects (e.g. ball and Earth). The weight of an object depends on the force of gravity pulling on that object. Students’ common misconceptions and learning difficulties in Dynamics and Gravitational field

• a force is required to maintain an object in its motion;

• friction (instead of inertia) causes objects to resist a change in its state of rest or motion.

• a force cannot move an object unless it is greater than the object’s weight;

Students often think that force is a single physical quantity associated with a single object rather than as an interaction between two objects which must therefore exist as an action reaction pair. They have difficulty in understanding that:

• two objects of greatly differing masses (e.g. Earth and us) exert forces of equal magnitude on each other;

• the normal force on an object and the weight of the object do not always have equal magnitudes;

• gravity acts on an object all the time (not just when it is falling). 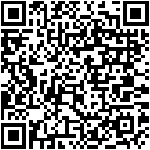