This email address is being protected from spambots. You need JavaScript enabled to view it.; Francisco Esquembre

Key inquiry question: What are the characteristics and effects of forces in nature?

Students’ prior knowledge of Forces

Students learn that a force:

• may be a push or a pull that acts on an object, e.g. magnetic force and gravitational force (forces that act at a distance), elastic spring force and frictional force (only when objects are in contact).

• can move a stationary object; speed up, slow down, change the direction or stop a moving object; and change the shape of objects.

Students conduct simple experiments to investigate the effects of friction on the motion of objects and forces on springs (mass on spring system), and learn how friction can be useful and can also be a problem.

• a force (push or pull) is exerted when one thing interacts with another, e.g. gravitational force, frictional force and magnetic force.

• forces affect the state of rest or motion and the size and shape of a body (unit: newton) and the type of force will have different effects on an object.

• only active agents (usually living things) exert forces and cause motion, whereas passive forces by inert objects (e.g. a table) do not exist;

• at equilibrium, forces cease to act on the object; and

• the tension in a string is the sum of the forces acting on each end.

Imagine placing a strip of tape on the floor. Then you ask a friend to run towards you from about 30 meters as fast as possible and to stop exactly on the tape. What will happen to your friend when he or she tries to stop? Explain your answer

What you demonstrated in your two thought experiments, is Newton’s First Law. It states that

“an object will remain at rest or in uniform motion in a straight line unless acted upon by an external force.”

In case 1 (video above), the coin stayed in place, as the card was pulled away so fast, that friction did not act. In case 2 (engage for newton's 1st law), your friend had some forward motion, that could not be removed immediately.

In this activity, you will be asked to draw forces in diagrams. Forces are usually indicated by arrows. The length of the arrow tells us how strong a force is: the longer the arrow, the larger the force.

In the example, we see two vertical forces acting on a Wooden Block resting on a slope. Its Fgrav= Weight is pulling it down and Fnorm = contact force on block by slope, an upward force. The Ffrict is the frictional force arising when there is a Fapp = Push to the right.  The fact that the arrows are equally large, tells us that the two forces have the same magnitude. 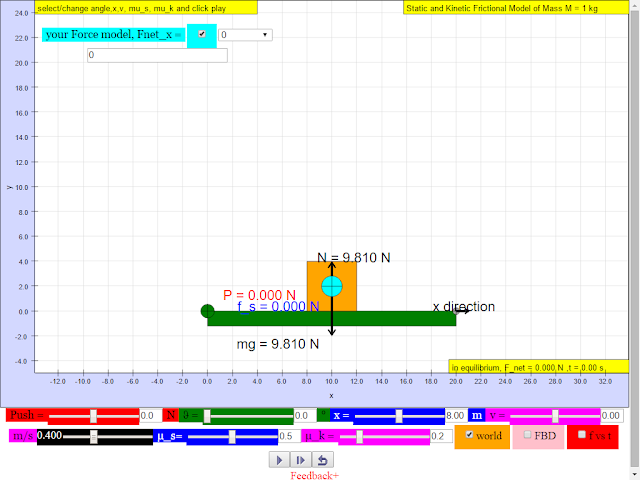 Tom has just been promoted and is pushing a file cabinet down the hall to his new office. He begins by looking at the file cabinet and considers how to best go about his task. Select Fx = 0 to model the zero force model. Note the motion of the block is no change in position and velocity is zero all the time. 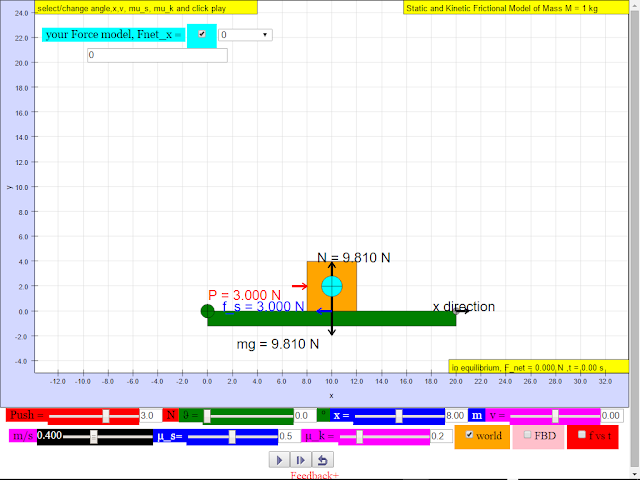 He then begins pushing on the file cabinet, which, at first, does not move at all. To simulate this case, select Push to be 3 N and observe what happens to the motion of the block. Note that the Push is cancel out by the Friction Force. Even at Push = 4.905 N is balanced out by Friction Force and the block does not move. 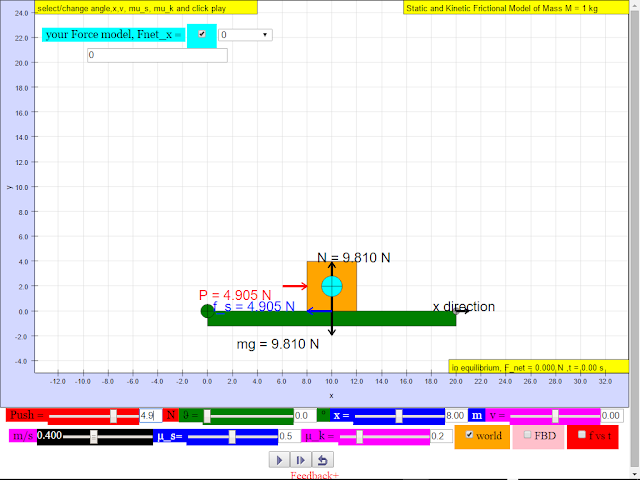 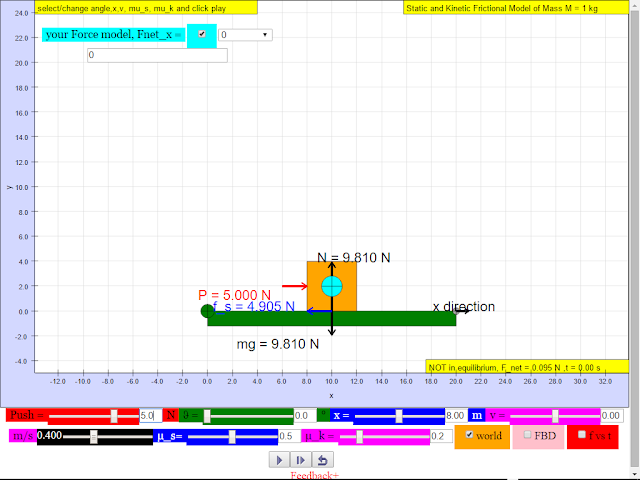 He pushes it slightly harder than the maximum static friction, and it is sliding . Thus, applying a Push force just larger than 4.905 N, the object begins to slide. But at t >0, the Friction becomes Kinetic Friction. 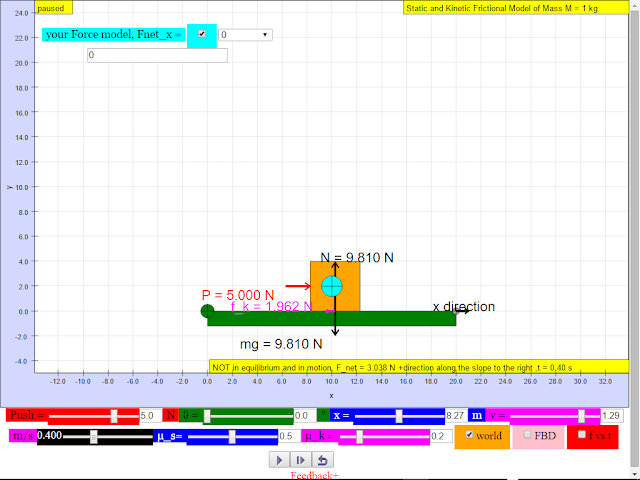 Eventually the file cabinet begins to slide across the floor, slowly moving towards his new office with acceleration. 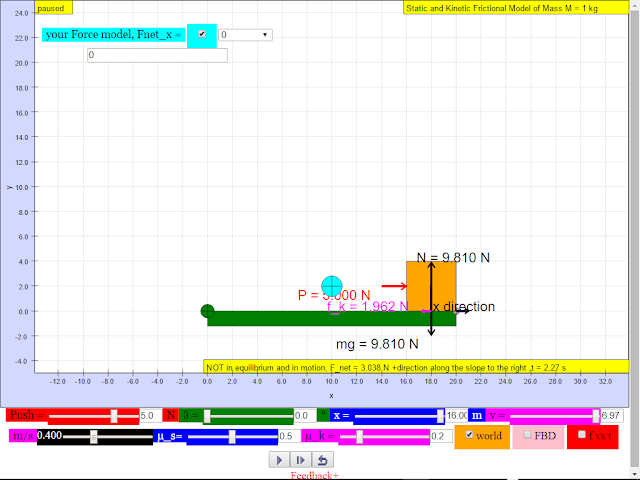 Activity 3: Using the model builder, select Fnet_x = 3.038 to simulate this effect. note that the static force is just a force to overcome initial when v = 0, after |v|>0, kinetic friction replaces as the frictional force.

Thus, the evidences and model building process above suggests the condition of acceleration is the presence of non zero net force, which is F = ma, Newton's Second Law.

Students may think that it is possible to experience is pushing the file cabinet, and it is moving to the right with constant velocity.

as suggested by workshop participant from JJC, moments are calculated and reflected in simulation! 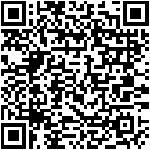